Last weekend, during Holland Cup 3 in the Netherlands, we did an important parallel test between the Alge Timy with start/finish beams and CloudTimer in manual timing mode. After a lot of lab & field testing, and development iterations we achieved great results in this competition.

The Holland Cup is a Dutch national race series. In this edition at the ‘Hooidonkse Kano Club’ about 100 runs were timed. For start and finish both beams connected to Alge Timy’s were set up. Also at both start and finish we had timekeepers with the CloudTimer app for Android. Further, three judging sections were set up with the CloudTimer Android app, and one race administrator was located in the race office to control all data.

The race went very smoothly. Although the timekeepers were mostly first-time-users, they did a great job. Also judging sections, in which ‘judges’ (read athletes) are rotating a lot worked great with the app. An important factor is that we had great connectivity at the course which off course is vital for the smooth functioning of the Cloud based timing system.

All result data from the CloudTimer app and Alge Timy system were compared into one file and the conclusion out of the data comparison was great. For the previous Holland Cup we still had some occasional large deviations when it came to the CloudTimer times. We quickly fixed this issue during the week and now the largest deviation between CloudTimer and Alge Timy was 5.4 tenths of a second(!). Which is pretty amazing for a comparison between hand timing (with untrained timers) and beam timing!!! We are particularly happy with achieving a 90% timing accuracy of max 3 tenths of a second. Also none of the deviations we saw had any impact on the medal table or further results. 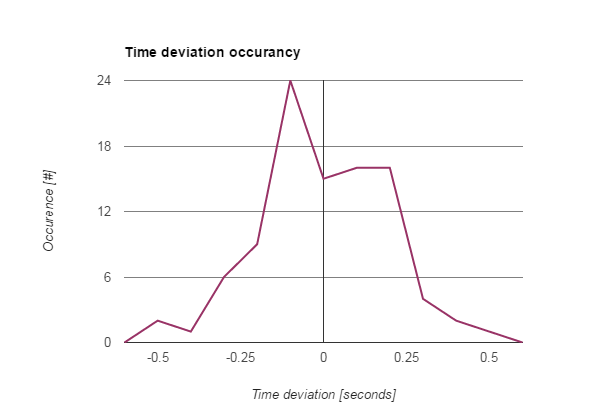 All in all we can say that we’ve reached a level with CloudTimer where the system has been proven not only for low cost, user friendliness and instant results, but also for accuracy (compared to stopwatch timed races). Our next steps will now be to easily connect to timing beams. Although we can already do this,  and have a timing accuracy of max 5 hundredths of a second with this setup, we still need to develop it a bit further. Mostly on the hardware side it doesn’t have the friendliness yet to be easily used out of the box.