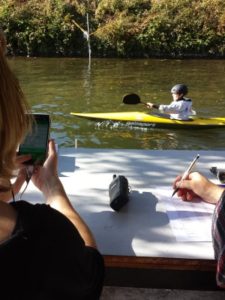 Last weekend a major step was taken for the CloudTimer team: the first officially timed national championships. The organisation was executed by a group of volunteers of both the Dutch and Belgian national canoe federations. The venue of this event was the Royal Mava Club Sauheid near the Belgian town of Liège.

The Royal Mava Club is historic ground for generations of paddlers as the club is over 100 years old now. Still it is a wonderful place to paddle a slalom race. Especially on a sunny day, and as the autumn leaves wonderfully color the banks of the river Ourthe.

About 70 paddlers from four countries took part in this event. Next to the Dutch and Belgian competitors, multiple paddlers from Germany and France also competed. This elevated the race level to a real international open championships.

Technical setup of the championships 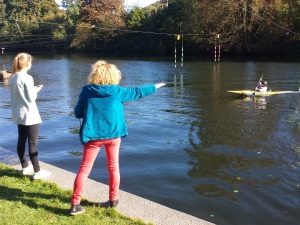 Judging and data entry on smartphone

Being in the hills of the Ardennes and close to the river, meant the absence of a wired internet connection. A single 3G/4G sim card connection therefore covered the entire event connectivity. Two wifi repeaters ensured coverage for start, finish and 4 judge sections. Next to the smartphones on the start and finish, in the race office two laptops were used for race management via the race dashboard. Results were printed on paper and judge scores were checked. In total only about 1.5 GB data was used. This included the live results viewer on a large screen and frequently consulting the print pages. 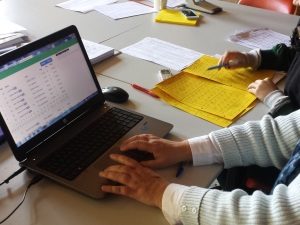 In addition to the CloudTimer systems an Alge-Timing system with photo cells was used to bring more accuracy. As of course, this race was an official championship.

The results can be found on: CloudTimer Results