RaceGorilla is developed to make sports timing as easy as possible without the need to invest in expensive hardware. To do so, we chose an everyday device aka smartphones to fulfil the timing and scoring need. But since a smartphone is not a professional real time timing device the question was raised if the timing accuracy is good enough? We used an Arduino microcontroller to simultaneously trigger start and finish at both RaceGorilla and an Alge Timy3. We simulated a race with almost 100 competitors and found that the results showed a remarkable accuracy.

The test was set up with an Arduino microcontroller, connected to an Alge Timy3 and 2 smartphones. The smartphones were both Samsumg (S4 and S5) devices.  The Arduino sends out triggers at a set interval to simulate a race of 93 competitors at 1 minute start intervals. The race time was set to 95 seconds. In figure 1 one can see that the time difference stays well within 0.020 seconds (vertical axis shows mili seconds), which pretty much proves the concept and the system. We will publish a paper in the next few weeks with accurate numbers of this comparison. 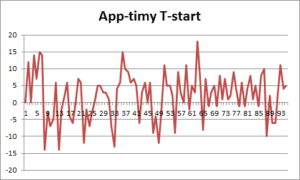 But is RaceGorilla always as accurate as this? No, more testing has to be done. We found out that the system accuracy depends on the quality of the internet connection as well. A good and solid WIFI is to be preferred over a GPRS or 3G connection, while 4G has better results than 3G. However, we always found that we stayed within the 0.05 sec mark when comparing run times between RaceGorilla and the Alge Timy3.

In addition to these Arduino “lab” test, in the next races will have a paralel timing system set up. RaceGorilla will be used as stopwatch timing and start/finish beams connected to Alge Timy’s are used as a benchmark system. More results on this topic are expected soon!