CloudTimer isn’t yet officially available in the app stores, but we timed our first official race! Canoe slalom Holland Cup 1 near Utrecht, the Netherlands was the decor for this milestone event. The Holland Cup is a Dutch race series governed by the national canoe federation.

With almost 40 participants and two runs during the day, CloudTimer worked well for the timing, judging and live results display for the event.  Small races like these are very challenging, as in The Netherlands a tradition has grown to start at a random order. This is mainly because the athletes also need to do the judging. There were frequent changes in scoring device operators (transmission judges) which created some (human) scoring errors which later needed to be adjusted. 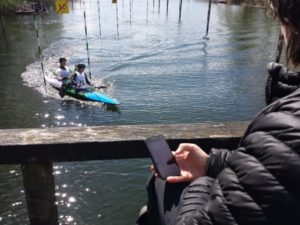 The app handled the random starts very well although this puts a strain on the start ‘judge’. The CloudTimer app permits to change categories during the race so athletes can be started at random order. For the judge stations a random start order doesn’t make any difference since participants are always displayed in the order of real starts (instead of planned starts). Some challenging situation occurred when athletes are overtaking each other during the race or finishing close to each other. CloudTimer can deal well with these situations with the ‘close finish’ function. But some timing experience is recommended in order to handle these situations correctly in a stressful race situation.

All in all, we produced nice results. The organising club was happy they could ran the race at relatively low cost, high flexibility and still maintain the quality of the results. We are looking forward to timing the next race in the Holland Cup Series in 4 weeks at the Volmolense Kano Club in Waalre!

Results of the Utrecht race can be found on results.cloudtimer.nl.