By Gerrit van Dalfsen (Tijdteam.nl) Canoe/ kayak races have individual starts and finishes. Typical run times between start and finish are 80 to 180 seconds. The runtimes of top-athletes are less than 1 second apart. Photo beam are commonly used in canoe slalom, but are they good enough for accurate timing?

The International Canoe Federation (ICF) requires for canoe/kayak slalom races a timing accuracy of better than 1/100 sec. Runtimes should be presented with an precision of 1/100 sec. 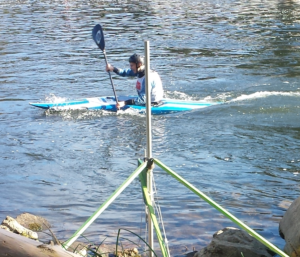 The timing accuracy for runtimes, when using manual pushbuttons at start and finish can approach 0.3 sec. When a photo beam is used to record start and finishes, the runtime accuracy can be improved, but there are pitfalls.

Photobeams to be used for timing canoe/ kayak slalom races must meet specific requirements. To span the width of a slalom course, the beams must be more than 10 meters wide. In some cases a beam width or more than 40 meters is required. Photocell transmitters and receivers are to be placed on the side walls of a slalom course, which are in many cases river banks with plants. You need some dedicated tripots to place the photocells in the river bank, and then have the possibility to align the photocells and put them on the right height above the water .

That is why the Gennepermolen timing team (Netherlands) developed a set of photo beams that do match these requirements.

Accuracy of Photofinish camera in slalom

Measurements with a timing camera shows that interrupting the photo beam with the paddle or with the trunk, can make a timing difference of up to 0.2 sec. So two paddlers which have theoretically the same runtime, can get results, when measured with photo beams, that differ up to 0.2 sec. As a consequence the runtime accuracy of slalom races when measured with photo beams is not better than 0.2 sec.

This inaccuracy of the photo beam measuring method is ignored at international competitions and is accepted as being part of the game. As the ICF rules require the runtimes being shown with a precision of 1/100 sec, the rankings based on this precision for runtimes that are less then 0.2 sec apart can be sheer lottery.